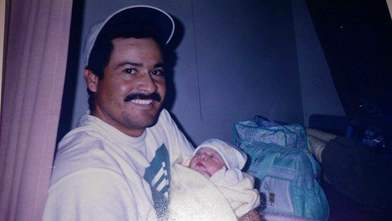 Since I haven’t seen my dad in a little over 6 years, my mom decided that it would be a good idea to go visit him. I was really nervous and scared. There would probably be no reason for me to be feeling that way, but it was not a normal dad and daughter bonding day. I wasn’t going to visit him at his house. I was going to visit him where he has been locked up for 10 years, jail.

The ride from my house to Tecate was about  an hour and 30 minutes long. The whole entire car ride there were so many things going through my mind: Was he really old? Would I cry? What do I do when I first see him? How will he react? What am I going to say? I was freaking out for an hour and 30 minutes, plus the line I had to make, which was another two more  hours. I was biting my nails to the point where my middle finger started bleeding. Thanks to my mom, my nerves calmed down a little bit. She kept talking to me, helping my mind busy and thinking about positive and beautiful things.

She said, “Melissa try to relax, look at how wonderful the sky looks.”

I was so busy freaking out that I didn’t notice how magnificent the sky looked. When I looked up I saw it was between a mixture of purple, red, and light blue. I kept admiring the sky for a few more minutes until my mind went back to my dad. Oh no, here we go again.

I was about to freak out again when my mom parked the car. There were about fifteen very tall and old looking buildings. There were also a lot of tall fences and a million of lights that surrounded the whole area. My heart was going crazy, I could hardly breathe. Everything felt so wrong. I was really scared. My mom reached for me and grabbed my hand. She did not speak, but instead she just looked me in the eyes and I nodded in response.
I stepped out of the car and walked towards the line of at least 250 people. It was cold, the sky was grey, and air was blowing my hair out of place. My blue jeans and burgundy jacket were not going to save me from this one, I thought.
It had been about 10 minutes and they had only let two people inside. I thought I was going to die because I felt my feet, legs, torso, arms, fingers, and face freezing.

​   After two long tiring hours of waiting in line and going through five tall and scary metal detectors, we were finally inside. I was finally going to see my dad after six long years of not seeing him.

My mom and I walked around looking for him. Everything looked so tall and old. There were no trees, nothing green. It all seemed dead.  I felt someone tap me twice on my shoulder. His skin looked a little bit darker and his face looked tired, but there was still a shine in his eyes that I will never forget. As soon as I saw him, I smiled and hugged him. I didn’t notice, but there were a lot of tears coming out of my eyes. I was really happy. All of my worries washed away.

We sat down inside this small and odd smelling building and ate chicken and drank orange flavored soda in a red solo cup. It started pouring rain and we decided to go outside. I realized they were playing my favorite song, Pelo Suelto by Gloria Trevi. My dad realized this too. We started dancing in the rain, twirling and jumping around. Everything was fun and games until a speaker on one of the walls announced that it was 3 pm. This meant that our time together was done. We hugged and cried. we said our I love you’s and parted our ways.

​  On our way home my mom whispered my name and said, “I’m glad you finally got the chance to see him and talk to him in person, not through a phone.” I did not say anything back, I couldn’t since there was a huge lump in my throat. ​

​         For the project, Resonance of Remembrance, I wrote a memoir about the time I went to visit my dad in jail after not having any contact with him after six years. The purpose of this memoir was to honor my dad, express my feelings, and to add descriptive words to my memoir to make people feel things towards the story. Through this project, I learned how to describe people's physical appearances, add dialogue with quotation marks, and how to add sound to enhance a story.

One strategy that helped me when I wrote my memoir was describing a character's physical appearance. Tim O'Brien used this strategy in the book, The Things They Carried, when he talked about how ageless Linda's eyes looked after she died. He wrote, " A nine-year-old girl just a kid, and yet there was something ageless in her eyes.." I used this strategy when I wrote about when I first hugged my dad and I noticed how his eyes were shinning with happiness​. I wrote, " His skin looked a little bit darker and his face looked a little tired, but there was still a shine in his eyes that I will never forget." By describing a character's physical appearances, I was able to make the reader get an idea of how he looked.

Another strategy that helped me when I wrote my memoir was adding dialogue with quotation marks. Tim O'Brien used this strategy when he talked about Elroy and how much money he owed him for staying over. He wrote, "Call it even," he said.
"No."
"Pick it up. Get yourself a haircut."
I used this strategy when I wrote about the time I was going back home and my mom told me how she was glad that my dad and I finally bonded. I wrote, " My mom whispered my name and said," I'm glad you finally got a chance to talk to him in person." By  adding dialogue, I was able to not only tell what she said, but how she was genuinely happy.

In addition to incorporating O'Brien's writing strategies​, the sounds that we included in our memoir greatly enhanced the stories we told. The most effective sound I used was the rain and the wind. I used this sound when I was describing the weather and how I was freezing because the day was really cold and the wind was messing my hair up. In my opinion, this sound enhanced this part of my memoir because it added to the gloomy mood of my memoir. Also the memoir was kind of sad, so the sound of rain made it a little bit more unhappy.

By listening to ​other's memoirs and writing my own, I realized that all of our memoir were different, but we worked hard on them and added a few strategies from Tim O'Brien. In my opinion being able to describe people's appearances was the most valuable strategy because I feel like it helped the reader get connected to what the author was trying to say.

A Christmas Carol:
​How Can I Help?

A Christmas Carol teacher a very important moral which is that everyone needs help, in a way. For example, Scrooge was a very lonely man even though he was really rich. He spent all of his Christmas days alone, until three spirits decided to help him. When reading about the three spirits I realized how much help people need despite how hard they hide it. Like Scrooge, he would focus on his job and being a very sarcastic person to hide how lonely of a person he actually was. I also learned that the little things are what matter the most, and make the biggest change.


This book inspired me to help people, specially illegal immigrants.
I think helping these people is really important because there is a huge amount of illegal immigrants, mostly families. Also, many people come to the U.S for a better future and instead of reaching that goal they die while trying, which I think is really unfair for them and their families (if any).


The article, Frequently Requested Statistics on Immigrants and Immigration in the United States by Jie Zong argues that there are a lot of illegal immigrants that are either really old or really young. The author states, “ Six percent were ages 5 to 17, Eighty percent were ages 18 to 64, and fourteen percent were age 65 and older.”
The article, Immigration Myths and Facts is about how there are a lot of myths about illegal immigrants and that they are ruining our society. The author states,” Myth: Immigrants are a drain on our social services. Fact: By paying taxes and Social Security, immigrants contribute far more to government coffers than they use in social services.”

The article, The History of Border Angels, is about how many deaths happen because of extreme heat and cold weather. The article states, “ Enrique teams with others in leaving water in the desert and blankets in the mountains.”

Our first idea it to go to the mountains and leave water bottles and/or for illegal immigrants.  Also, leaving blankets on the mountains to help them support them during the cold and harsh weather. Leaving water bottles and blankets will be easier for us because the materials are easy to attain. This idea is really helpful because it will help them survive the long run and get “home” safe. This idea would be enjoyable for us because we know we are helping people to survive. The people we will help will enjoy this because there is a possibility that they will be warm and hydrated for the first time in months. We will enact this plan because it is easy, cheap, and helpful. If we can’t all go then we will donate the materials.

Our first step is to buy the packs of water bottles and a couple blankets. The next step is to contact the organization. Finally, go to their main office and give them the materials (water and blankets). 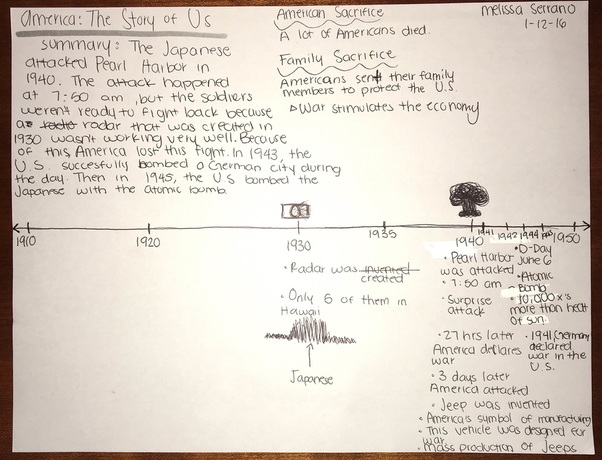 The picture above shows my WWII timeline. I created this timeline by writing the events that happened on WWII based on a documentary. 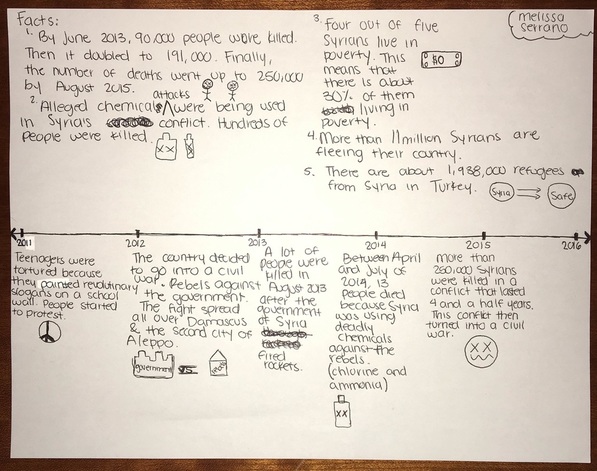 The picture above shows my Syrian Civil War timeline. I created this timeline from the years 2011-2016 based on an article. 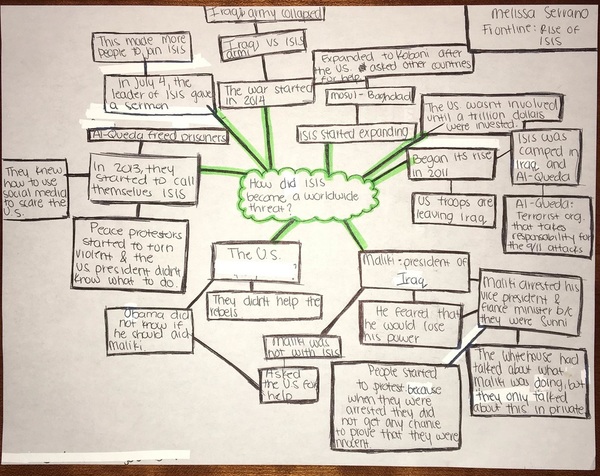 The picture above shows my web that explains how ISIS raised to power. We gathered this information from a documentary.
​ “From the documentary, what do you think was the most important event that caused ISIS to rise to power?”

​      I think that the most important event that the most important event that caused ISIS to gain more power was when they free the prisoners. They were able to get everyone that they freed on their side. This means that they had more people to help them get that they want. Since they freed them after they were locked up for a long time, the prisoners were thankful and they only way to show their gratitude was joining with their team. People should be aware and care about ISIS rising to power because it is not a small issue and a lot of people could get hurt, If this conflict doesn't get fixed, more and more lives are going to be at risk.
​