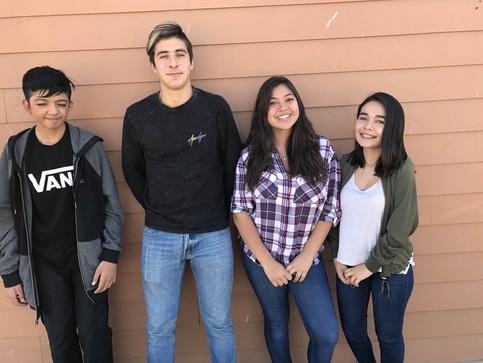 This is a link to our website where we recorded everything we did: http://madpropspodcasts.weebly.com/melissa-paola-luis--rafa.html

The Mad Props Podcast project was made to help out voters in California understand what the ballot measures are all about. My group's proposition was 57. To help out voters understand, we decided to focus on how prop 57 will affect inmates. Other group's talked about prop 62/66, 63, and 64.  Our podcasts launched on November 7,2016. 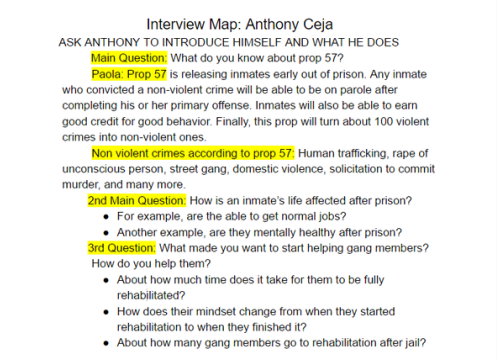 This is the interview map that my group and I created in order for us to be able to interview Anthony Ceja. While working on this, I realized how we needed to add more follow up questions in order for the interview to run smoothly. It was very hard working on this because I couldn't find any information about who Anthony Ceja was, so I had no idea what to write. Then I realized what I wanted t get out from this interview: how are inmates affected by prison. The first questions were mostly about who he is and what he does. From the middle to end, we asked more stuff that could go with our podcast. 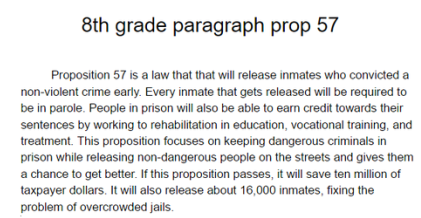 I chose this because it really helped me understand what my prop was all about. Also, I feel like this was the base of the whole project. If I wasn't able to describe proposition 57 in my own words, how was I supposed to ask my burning questions, and most importantly, interview people about it. Throughout this assignment, I was able to do more research on this prop and I think that it really helped me understand the pros and cons of it. Therefore, I now have a very strong opinion on it. 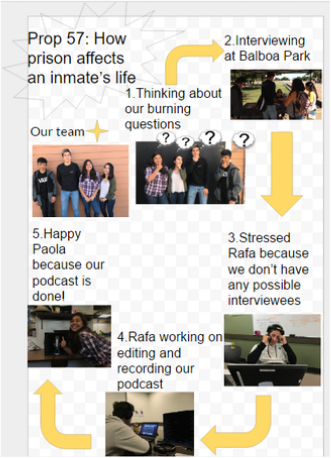 I chose this because it shows everything we worked on, in very simple steps. I noticed how everyone was making their poster super serious, but I really wanted to change it up a bit. I tried to show (almost) all of our steps in funny pictures. It didn't really turn out in the way I wanted it to, but it was different that the other ones, so that's all that mattered to me.

We started our podcast pitch with our burning questions, basically what we really wanted to know about this prop.
The first one we had was: What is a violent crime, according to proposition 57?
The one we ended with was: How does prison affect an inmate's life? 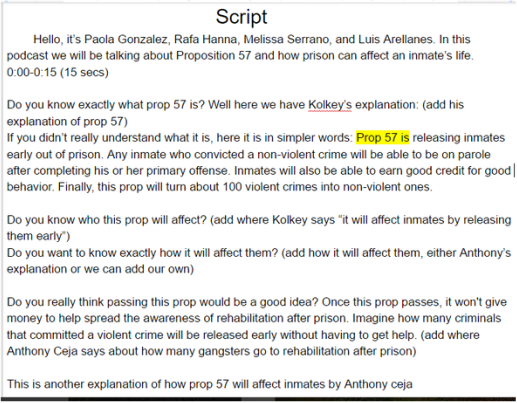 While my partners worked on editing and cutting our interview with William Kolkey, I worked on writing the script. It was difficult to start it because we only had one interview done and we were going to do the second one in three days. I knew which parts from Kolkey's interview I wanted to add, but I had no idea what to write for Anthony Ceja's part because we hadn't done it. In the end, I just decided to kind of guess what Anthony would say and what questions we would add to our podcast. After our interviews were done, I realized that we should change the whole script. We didn't have time to write the new one, so we just talked on the microphone and gave our opinion on things. Also, we didn't add many things that I wished we would've, but we added Ceja's personal story, so it made our podcast stronger.
Our Podcast
Recording our podcast was full of laughter and disageements. We recorded everything in Dr. P's and Ms. Kaitlin's office. Sometimes recording was easy, but other days it wasn't. Some days were easy because we only needed to record small things, so it went by really fast. There were days when we needed to record so much, and we couldn't because there was either a lot of noise going on outside the office, or we just didn't have enough time. One of the moments that I really enjoyed was the first time we started "recording". It was so much fun because we were playing around with the yetti and the earphones. We didn't finish recording our podcast until the last day. The last day was so difficult for me because one of my partners left early, and the other one was busy with other work. I was the one that ended up editing and piecing everything together which really stressed me out.

Exhibition night went well. When I got there and sat down I was so nervous. One of the podcasts that was playing was really well done and it made me want to run out of the place. After all of the podcast groups finally ended, it was my turn to go up with my group. When I was sitting there, I think I learned even more about my prop because I focused a lot on the podcast while it was playing. After it was over, the audience started asking questions. One of my favorite questions was: What's your opinion on this prop?
That question really made me think. Finally, I gave my opinion. What I think about proposition 57 is that it has its cons and pros. Therefore im neutral about it. One of the pros is that there will be mandatory rehabilitation to every inmate that is released, which is something that isn't required right now. One of the cons is that it turned about 100 violent crimes into non-violent ones.